Home / About Us / Espact Leadership

Dr Almaz Kadyraliev is the Rector of Kyrgyz Economic University, Bishkek, Kyrgyz Republic. He did his doctoral studies at Masaryk University under an Erasmus Mundus Exchange Programme and was awarded a PhD by the same university. He is a member of the Kyrgyz Association of Science of Economics and Politics, a member of the Club of Young Architects of Kyrgyz State and a recipient of the Akyl Tirek Award for contribution to the development of science in the Kyrgyz Republic. He has made extensive contributions to the public sector in the Kyrgyz Republic and in the development of professional education in the Republic.  He is currently Deputy Chairman of Public Council under the Ministry of Transport and Road of Kyrgyz Republic and Chairman of Academic Council, Kyrgyz Economic University named after M. Ryskulbekov. His research and conference activities have taken him to most of the European countries under the Bologna system and to India and Malaysia. He has also been instrumental in developing collaborations between universities and in designing joint and double degrees between universities. 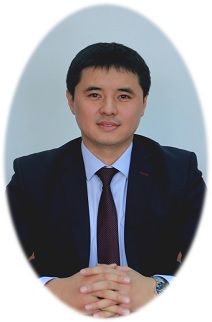