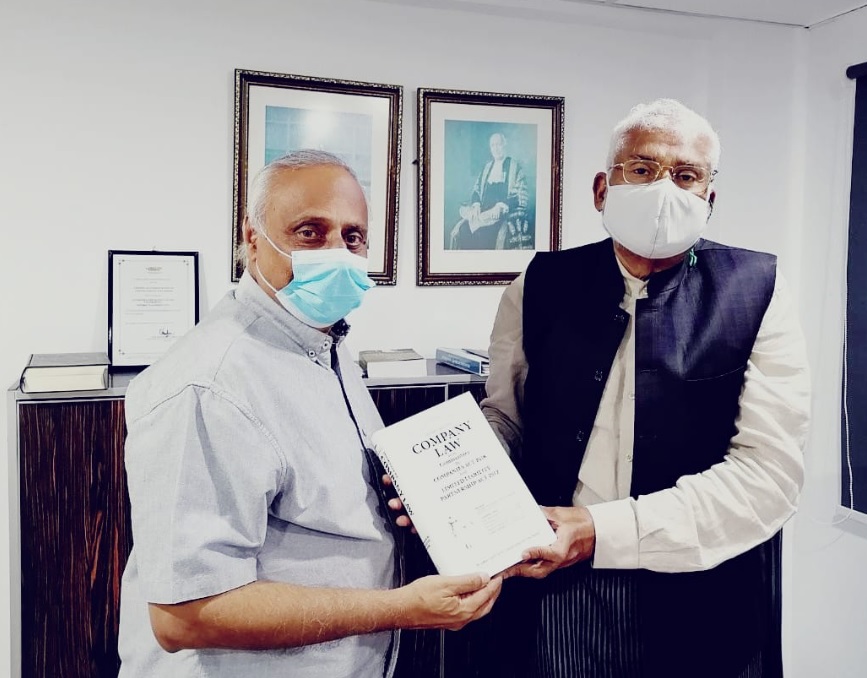 By U K Menon LLM (Monash), Barrister of the Inner Temple, advocate and Solicitor, Malaya

Justice Datuk Dr. Hj. Hamid Sultan Bin Abu Backer is one of the most innovative minds to emerge from the Malaysian judiciary. From his Oath Jurisprudence as an alternative approach to the long-prevailing Basis Structure Jurisprudence in constitutional law, to the establishment of a university-based arbitration, this former judge of the Court of Appeal is a tireless reformer and innovator of the law and the legal system. His latest contribution, Janab’s Key to Company Law, presents an important and well-established area of law in a new and exciting style.

Few areas of common law are as fascinating as the law of corporations and its immediate derivative – company law. A study of the subject helps us see how men's thoughts moved over the centuries toward the idea of a group of people being treated as an entity. If modern company law is the offspring of the corporation, the idea of the corporation lies, as Harold Laski pointed out,[2] in the group life of the old English boroughs, guilds, and ecclesiastical bodies. But the early corporations from which the modern trading companies evolved, were established as not-for-profit entities as most companies now are, but to promote a public good such as hospitals, universities, and other charities. Only in the 17th century did making money become a major focus for corporations. This came about with the rise of colonialism when the corporation became a vehicle for trading purposes, used by a class of adventurers exploiting the colonial process.

Today, the fascination with the company lies not in its history, but in its presence in all countries as the principal instrument of business. The terms company and corporation evoke in the public mind, images of wealth and success and of people, ‘korporats’, they are often called, who drive fancy cars, live in mansions and five-star hotels, and have their expenses paid by the company they work for. The corporate man or woman is seen as the epitome of modern success, of someone having arrived.[3]

Yet, despite the enchantment, no other device created by law has been at the centre of so many controversies as the limited liability company. Even our colonial past is linked to the insalubrious pursuits of corporations such as the East India Company and the North Borneo Chartered Company which have been the main vehicles of colonialism in this part of the world. The mischief that they caused centuries ago continues to haunt us today as is shown by the recent events concerning the Sulu claim to Sabah. Although not always the servants of any country, multinational companies operating outside their western bases, continue to bear traces of the practices of these old colonial companies in their activities in Asia and Africa.

The study of company law in modern law schools is, however, seldom concerned with the rise of corporations in the economic history of man but with the company, which can be established by anyone by spending a few dollars and complying with a few simple formalities. Company law today is mostly about the establishment and regulation of companies, their internal management, their transactions with outsiders, the rights of the shareholders among themselves, and finally about how they are terminated. Most of the law about companies is found in legislation supported by a huge body of case law that interprets the legislation and imports into the subject long-established principles of equity and trust. This aspect of company law is emphasised throughout the book. The author makes the point at various parts of the book, that the new Companies Act 2016 will continue to be interpreted according to those principles and the existing case law on the subject.

Pre-independent legislation on companies must be unravelled through the law-making processes of the different colonial entities such as the Straits Settlements, the Federated Malay States, the Unfederated Malay States, and the Malayan Union. Different Ordinances governed the different entities until the formation of the Malayan Union when a single legislation, the Companies Ordinance 1946 (MU 13 of 1946) was applied to all the said entities. When the independent Federation of Malaya was formed in 1957, the Companies Ordinance of 1946 continued. There was a further consolidation of the legislation when the new political entity of Malaysia was formed. A new legislation, the Companies Act 1965 (the 1965 Act), based to a large degree on the Uniform Companies Act 1961 of Australia, was applied throughout Malaysia. The 1965 Act went through several amendments. More importantly, it was joined by other legislation regulating the corporate environment and the securities industry, most notably the Securities Commission Act 1993.

Companies’ legislation in this country, from the first ordinances to the Companies Act 1965 had their origins in companies’ legislation of Britain and other Commonwealth countries.[4] The 2016 legislation is a modernisation of company law that responds to a wider range of influences and recommendations, including the World Bank’s 2012 Malaysia Report of the Observance of Standards and Codes on Accounting and Audit Oversight, the World Bank’s Ease of Doing Business Report and the report issued by the Organisation for Economic Co-operation and Development (OECD) Peer Review Group of the Global Forum on Transparency and Exchange of Information for Tax Purposes on Malaysia.[5]

Company law has become such a vast subject that is best approached through a textbook on the subject or a practitioner’s guide. The 2016 Act has 620 sections as opposed to the 371 sections in the previous legislation. There are also thirteen schedules to the new Act, compared to the ten in the old Act.

Justice Datuk Dr. Hj. Hamid Sultan Bin Abu Backer’s book follows a long tradition of books on company law, some of which, like Gower’s authoritative Modern Company Law have influenced judicial decisions on the subject in several jurisdictions. Janab’s Key to Company Law (JKCL), written from the perspective of a senior judge of the appeal court is bound to have the same impact on the development of case law on the subject in this country.

JKCL adopts an entirely original approach to a textbook on company law that is multidimensional and more accessible to the different aspects of the subject. The book is divided into eight chapters as shown below.

The chapters, other than Chapter 8[6], which deals with the Limited Liability Partnership, provide different, almost discrete pathways into the vast subject. Someone who is interested with a general understanding of the subject or a quick appreciation of how some of the main principles of company law have been altered by the new legislation will find his questions answered in the introductory chapter. The chapter also provides a quick glimpse of all areas of company law, which will be useful for someone approaching the subject for the first time.

Chapter II as the name indicates is a bird’s eye view of all five parts of the Act, followed by the author’s view of the significant changes made by the new Act. The chapter highlights thirty-four significant changes by way of bullet points. This section of the chapter provides researchers a quick understanding of where the changes have taken place from the previous legislation. Explanatory cases in Chapter II takes the reader through the cases that have interpreted some of the more important provisions of the Act. About seventy cases are discussed in this section.

Chapter III explains some of the actors and processes in company law through a glossary of terms taken from the Companies Act and from company law generally. The section is useful as a quick reference to those terms, and how, if it all, the meanings attributed to them have changed.

Chapter IV entitled, Company Jurisprudence and Companies Act 2016. The chapter examines several important concepts that have woven company law into a single discipline or code of behaviour. The observance of these concepts is the consideration exacted by law for the privileges of incorporation and limited liability. The chapter covers areas such as directors’ duties, the Rule in Foss v Harbottle, derivative actions against the company, minority rights of shareholders and oppression of their interests.

Chapter V deals with receivers and managers and Chapter VI with the winding up of the companies. Both chapters provide detailed expositions of the respective subjects and can stand as independent tomes on the subjects.

Chapter VII of the book, the longest in the book, deals with a section-by-section analysis of the companies Act 2016. It is this chapter that will prove most useful to the student and young practitioner, the main audiences intended by the author. One difficulty encountered in teaching the subject over a twenty-year period in two different jurisdictions has been in aligning students’ understanding of the many principles of company law with the related statutory provisions. The commentary on the Companies Act 2016 presented in Chapter VII will go a long way in overcoming that difficulty. The analysis will also be of considerable help to the young practitioner stepping into a practice in corporate law. It would have helped if Chapter VII had a separate index to its contents, linking the general principles to the statutory provisions. But this is not a serious omission because the reader will find such a link between principles and statutory provisions in the contents page to Chapter II.

As mentioned earlier, JKCL is not your typical company law textbook, but a reader taking some moments to understand the layout of the chapters in the book will be amply rewarded by grasping the principles of company law, the statutory expression of those principles as well as their underlying jurisprudence.

From the perspective of a teacher of company law, the book may also serve as an indispensable resource package for that purpose.

[1] The full title of the book is Janab’s Key to Company Law with Commentary to Companies Act 2016 and Limited Liability Partnership Act 2012.

[3] This was not always the public opinion. There is an old Tamil saying, ‘even you rear chicken, rear them for the government’.

[6] Chapter VIII of the book that deals with Limited Liability Partnerships is not covered in this review.