Private education or education provided through non-government institutions has played an important role in building capacity and expanding access to education at all levels, but notably in higher education.

Private education and the role played by private education providers in expanding access and diversifying educational options have seldom received the appreciation of the public or policy makers. Historically, because of the way in which the country emerged and was created in the course of colonial occupation, private education preceded official, government supported education. Private providers in the form of Chinese guilds and associations, philanthropists from all communities, ethnic associations and Christian churches played an important role in the provision and development of education in the territories that today make up the Federation. Not surprisingly, private education in the early stages of development of this country responded mainly to the needs of the different communities that made up the population in the last 200 years. This resulted in separate systems of educations with different media of instruction and different curricula being established that bore strong connection to the communities they were meant to serve. The resulting hodgepodge system of education became the main challenge to policy makers at the end of WW2 and the last years of colonialism who were seeking to create a single education system to lay the foundation upon which a new nation would be created. We narrate elsewhere on this site how a common system of education was forged and the compromises that had to be made to the different claimants.

With the increase (in the early Fifties and after Independence) in government funded educational institutions and the creation of a common system of education, public perception of private education declined to that of an alternative education system that was seen to cater only for the over-aged and underperforming student. The importance of the private sector in education was realized only in recent times, mainly because of the way in which they met the burgeoning and unfulfilled demand for higher education against limited places in public institutions. This was followed by the increase in the number of private educational institutions at the primary and secondary levels, not because of any limited capacity in the public sector but for a better quality of education and a more varied school experience than that found in public schools.

The growth of the private sector and its position now as an important provider of education at all levels is also the result of the serious commercialization of education that was stimulated by the entry into the education sector in the mid 1980’s of business corporations that hitherto had shown no interest in making investments into education. By that time, private colleges providing post-secondary education had already evolved unique arrangements with foreign professional institutions and universities that enabled a Malaysian to complete part of a tertiary level education in the local college before travelling to the foreign institution to complete his course of study. With fresh investment from the new players into better colleges and facilities, enrolments in private colleges grew to a point that by the early 1990s, the role played by private colleges was formidable enough to have created two systems of higher education in the country - a formal public system and an informal private system. At the same time government’s enthusiasm is divesting public services to private owners speeded the development of policies on the privatization of education. A package of legislation passed through parliament in 1996 saw the corporatization of public universities and a new regime of laws that allowed the creation and regulation of private higher educational institutions, including private universities and branch campuses of foreign universities.

Primary and secondary education was also commercialized with many new private schools being set up, offering local and international curricula.

The dramatic progress that the nation has witnessed in enlarging access to education at all levels, is to an important part, the result of the efforts and growth of the private sector.

All private educational institutions are required to register under the Act and observe all its provisions and the provisions of all regulations issued under the Act. (s. 79)

based on the prescribed curriculum (s.75).

Finally, under s. 77, private institutions must obtain the approval of the Minister in writing before conducting any course of study or training programme jointly, in association, affiliation or collaboration or otherwise, with a university or institution of higher education or other educational institution or organization within or outside Malaysia.

Apart from the above restrictions, it would seem that private institutions established under the Education Act 1996 are free to conduct training and education in any field they chose to do so. The Education (Registration of Educational Institutions) Regulations 1997 [P.U. (A) 534/1997] envisages private institutions being established for primary or secondary education or providing both levels of education, tuition centres and skills centres covering commercial, vocational, technical language or other skills. Institutions may be full time, part-time or delivering on a distance education mode.

Who may establish a private educational institution?

Whilst s. 73 recognises the establishment of private educational institutions, it does not include any stipulations as to who may establish such institutions. Nor are there in the EA1996 any provisions as to the formation of a company or any requirements on ownership as are found in the Private Higher Educational Institutions Act 1996.

Independently appointed Board of Trustees work with the school leadership to manage each of these schools, which are funded through tuition and philanthropic contributions. These schools use Chinese language as the main medium of instruction, and teach a curriculum developed by Dong Jiao Zong benchmarked against systems such as those used in Taiwan and England. The schools prepare students for a standardized examination known as the Unified Examination Certificate (at Year 6 of secondary school), although many schools also prepare their students for the SPM. 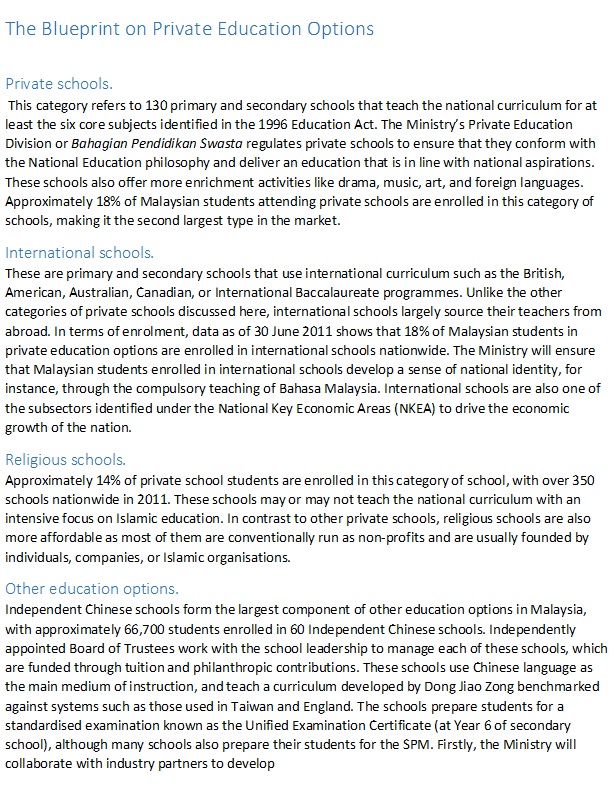